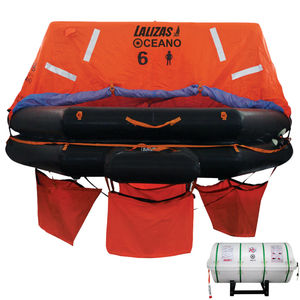 • For use on board commercial vessels engaged on international voyages • Equipment Packs: SOLAS Pack A or SOLAS Pack B • Available Capacities: from 6 to 35 Persons • Flat Canister option available (Capacities from 8 to 12 Persons) • ... 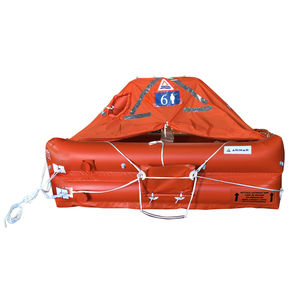 Complies with Circolare N. 78 del 29/12/2008. Specific self-inflatingliferafts for National Navigation. They can be used on all boats flying the Italian flag such as: Passenger ships not subject to Legisltive Decree 45/2000; Cargo ... 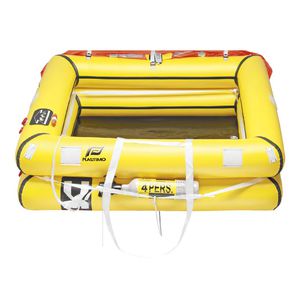 ... the ladder and then topple easily into the raft. Should the liferaft inflate upside down, the boarding ladder simply reverts, to allow the casualty to pull himself on the capsized liferaft and make ... 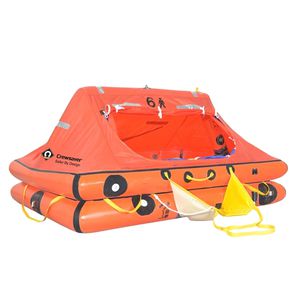 Using our skills and expertise in the design and manufacture of both liferafts and lifejackets, we have created the most advanced specification ISO Ocean Liferaft yet. The Crewsaver Liferaft ... 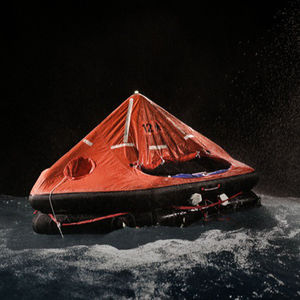 4, 6, 8, 10, 12, 16, 20, 25 persons The RFD Surviva Throw Over & Davit launch liferafts are manufactured to the highest quality standards and stowed in a variety of containers designed to suit a variety of deck spaces. ... 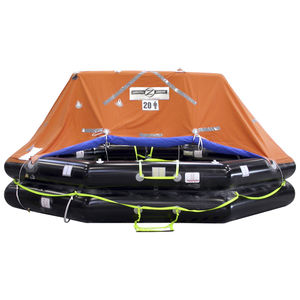 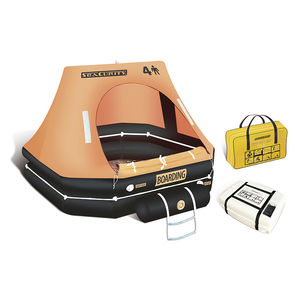 The SeaCurity Offshore liferaft is a true offshore raft without compromises. Although it did not undergo the ISO 9650 certification it fully complies with these standards. Offshore liferafts as from ... 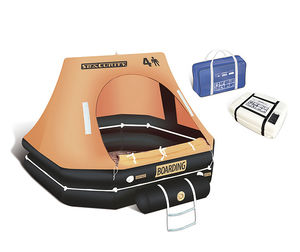 This liferaft represents a new approach based on the latest developments for rescue equipment. It was constructed in accordance with the international standard ISO 9650, Part 1, Type 1 (Offshore), Group A (inflatable ... 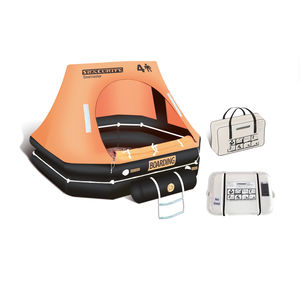 The SeaCurity Seamaster is a liferaft which covers all basic requirements for a liferaft. The focus was on price/performance ratio but without compromising the quality of the material used for the manufacturing ... 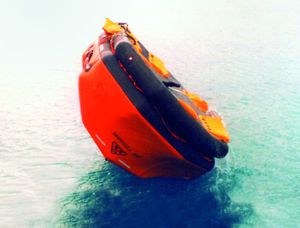 ... Launch Liferafts are compliant with appropriate Marine Equipment Directives (MEDs). Equipped with all the safety features of conventional DSB Liferafts, they have an additional self-righting capability. In ... 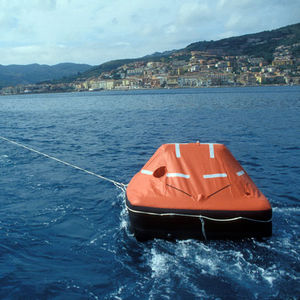 These liferafts are approved by the Italian Ministry of the Merchant Navy in compliance with the Ministerial Circular Letter n. 90 III series dated 29.03.1993 for the use on board of merchant vessels qualified for the ... 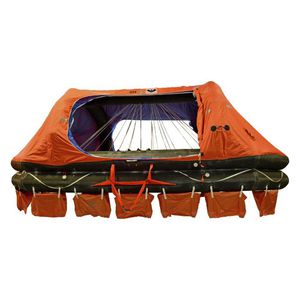 For commercial vessels, RoRo vessels and offshore installations, SOLAS approved. The liferaft is attached to a davit and inflated at deck level for embarkation. It is then launched to sea level. Delivered in a fibreglass ... 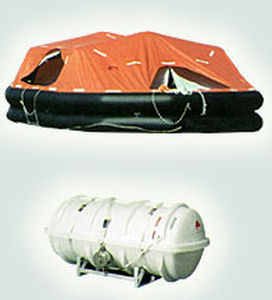 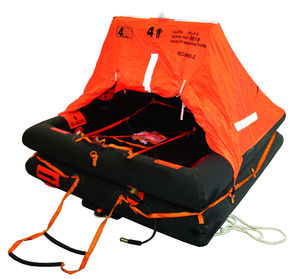 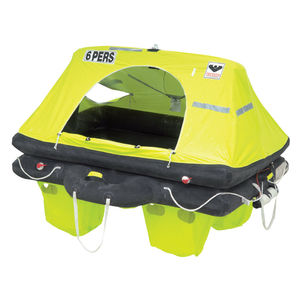 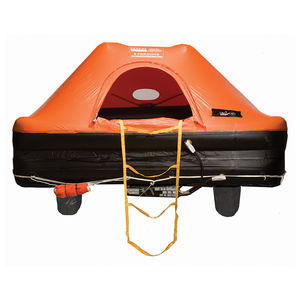 The Coastal Commander is Revere Survival Products’ answer to economy, durability and above all, safety – requiring service just once every three years! Constructed with rugged oversized tubes and an automatic inflatable canopy, the Coastal ... 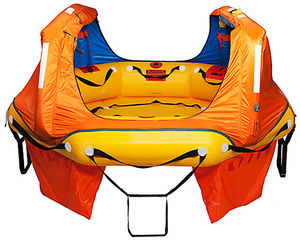 Convertible canopy, easy inflation and entry. SWITLIKs signature convertible canopy system allows the CPR to be inflated with the canopy still furled. This allows for easier boarding from either the water or your vessel. Once in the ... 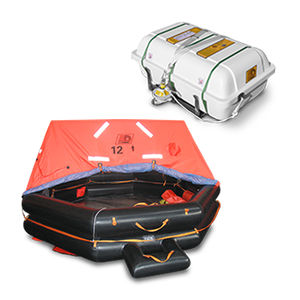 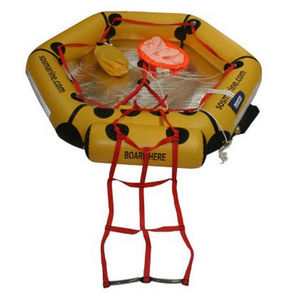 SOS 2 Person Life Raft A spokes person from SOS Marine said "This is the market we are addressing with our 2 person life raft- being one of the smallest lightest and affordable on the market but with many features found in the larger ... 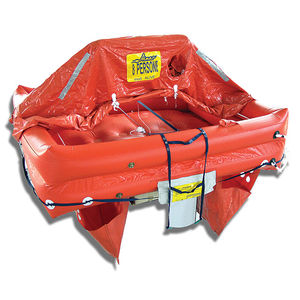 ... elevated safety thanks to the new applied technology and the unusual productive trial. The constitutive elements of the life-raft are all certificates. Once finished is manufactured in a lot â€œvacuum packedâ€ for a ...

Compare this product Remove from comparison tool
See the other products
Almar S.r.l. 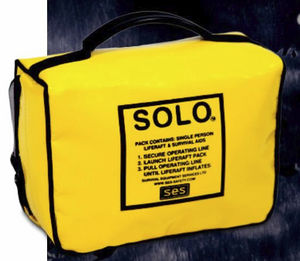 ... splash guard. The advanced Dipped Floor seating lowers the centre of gravity resulting in enhanced in-water stability. The liferaft is inflated using a disposable CO² cylinder which provides low cost maintenance due to ... 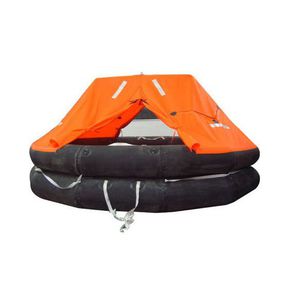 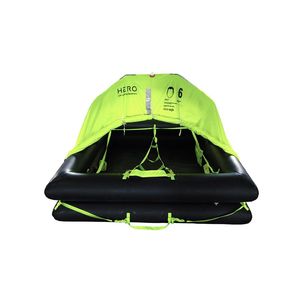 ... for coastal or inland water cruising. Hero’s Coastal is required for navigation from 6 to 60 miles of a shelter. This liferaft is especially recommended during daytime navigation. It offers stability and thermal ... 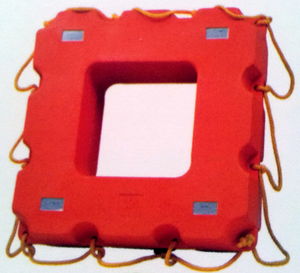 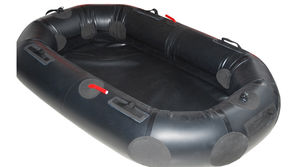 Designed for wet crossings, the R1 Life Raft can be inflated by mouth or handle pump in a few minutes. The front and rear compartments deflate in a few seconds through two valves. The raft allows a man and his pack to cross waterways ... 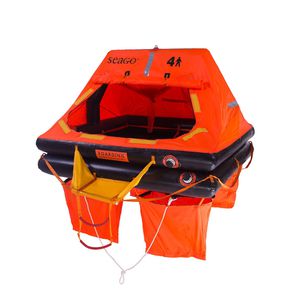 The SeaMaster is the perfect partner for oﬀshore sailing on recreational or coded craft, designed and refined over many years in partnership with professionals. We have worked with users from a variety of backgrounds to design and vigorously ...

These craft are found on all recreational vessels sailing a certain distance from the coast, as well as on ships and commercial boats, in accordance with rules issued by maritime authorities of the country of registration.

In recreational boating, there are coastal models without survival gear and high-seas versions equipped with food, water, fishing gear, knives and other useful items. They are stored in a bag or a rectangular container. Professional rafts are housed in cylinders on cradles, and can be launched from the deck via a slide. Capacity varies immensely, from four to over 200 persons for those carried on passenger vessels.

Rafts usually have pontoons which inflate automatically from hydrostatic pressure when they hit the water, or manually by pulling on a cord. They have an insulated double bottom to ward off hypothermia. Most have a tent to protect occupants from sun and rain. Generally, they have seawater ballast and are self-righting, since they tend to overturn in heavy seas.

Choice will depend first on the raft's certification, which must correspond to the vessel type. ISO norms suffice for leisure craft, while certain ships must respect SOLAS regulations. Raft capacity and coastal or offshore class are also significant criteria.

Extend the search
Average score: 3.7/5 (15 votes)
With NauticExpo you can: Find a nearby distributor or reseller| Contact the manufacturer to get a quote or a price | Examine product characteristics and technical specifications for major brands | View PDF catalogues and other online documentation
*Prices are pre-tax. They exclude delivery charges and customs duties and do not include additional charges for installation or activation options. Prices are indicative only and may vary by country, with changes to the cost of raw materials and exchange rates.
Compare
Remove all
Compare up to 10 products