The history of FORMA begins in 1979 along with the youthful dreams of its founders. With a strong vision and determined to supply the marine market with the most high quality marine furniture, Agis Zografos set up a small manufacturing plant in Athens, Greece and began production of a few selective products. As the company steadily grew and production increased, its clientele also expanded internationally. A second manufacturing plant was thus set up in China in the late 90’s to better cope with demand. Throughout the years our company has been enjoying steady growth and we have accumulated valuable experience and knowledge in the design, creation and the manufacture of marine furniture. During this long period we have developed strong ties with our customers and suppliers with whom we have worked side by side all in friendship and mutual respect. After over 30 years of serving the marine market, we still feel the same enthusiasm as in the early days. Our pride is knowing that our products are enjoyed throughout the world. Today, Forma offers over 100 high quality products which can be found in 25 countries worldwide.

Our products are ‘made in Greece’ with pride.

The Ancient Greeks called the folding stool “diphros okladias”. Its ceremonial use and form were directly inspired from the Egyptian civilization. The “diphros okladias” did not have a prescribed place in the house; its role was dedicated to accommodating household guests of higher rank.

These folding stools were ornamented from the beginning: a folding stool with animal legs represents a natural evolution towards the curved legs, ornamentation that characterized stools of later centuries. 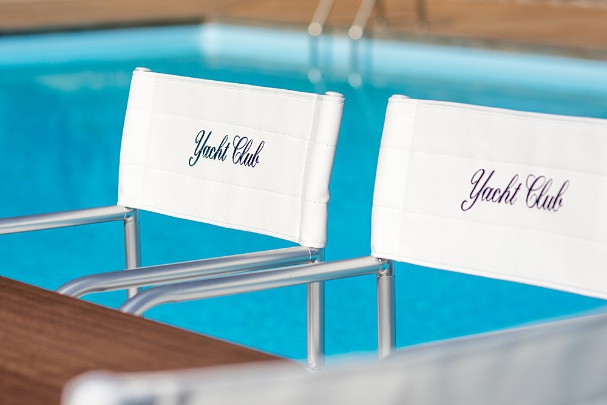 The name "FORMA" stands for high quality outdoor furniture serving the well-being of our customers. We are committed to ensure the durability and longevity of our products as well as to develop new ones improved in quality, design and performance. Our extensive knowledge coupled with the experience we have accumulated over the years enables us to confirm that Forma furniture is distinguished for the comfort it provides, the quality of the products, the reliability of the brand.

Our marine range of folding furniture is ideal for the stringent requirements of the sea environment and is recognized as the leading brand name in yacht furniture.

You will find FORMA furniture on boat decks in the most remote marinas while our beach furniture brightens seashores around the globe.