The X40 Express is a modern, robust, and luxurious interpretation of the classic express design. One glance at the raked, wrap-around windscreen and flush deck forward make it clear that Reliant Yachts partners Dave MacFarlane and Jim Ewing have produced something different in this custom 40-foot, 40-knot speedster.

The X40’s profile makes a statement with its plumb bow and straight, clean lines, accentuated by the cambered teak deck. Framing that deck is an extraordinary, uninterrupted, low-profile cap rail painted the same metallic silver as the hull. Yet the X40 makes another statement entirely when the carbon-fiber hardtop is removed, turning a coupe into a convertible.

Reliant refined every detail to maximize space for the living quarters, which for this client meant working within the dimensions of the superyacht tender garage in which the X40 would live. The pay-off is a warm inviting stateroom, head, shower and galley. One of the key decisions made along the way was to choose Konrad 660b Stern Drives, which are powered by a pair of Cummins QSB 6.7 480s. The stern drives lift up before the boat slides through the garage door of its mothership.

Initial sea trials near Istanbul in light winds and calm seas proved that the X40 could run at 40 knots, topping out at 40.7 knots at 3300 rpm. The boat handled well and cruised comfortably between 27 and 33 knots.

Go to the Reliant Yachts website for more information 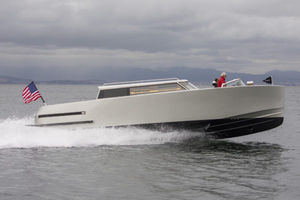 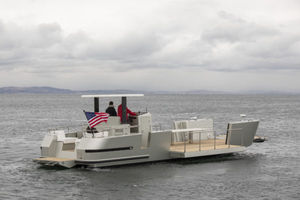 utility boat professional boat / landing craft / stern-drive X40L LANDER
Related Searches
*Prices are pre-tax. They exclude delivery charges and customs duties and do not include additional charges for installation or activation options. Prices are indicative only and may vary by country, with changes to the cost of raw materials and exchange rates.
Compare
Don’t compare this product
Compare up to 10 products