... formation of condensation inside the binoculars is totally prevented by this high-tech proprietary solution. Even temperature variations between -40 °C to +80 °C do not affect the functionality of STEINER nitrogen-filled ... 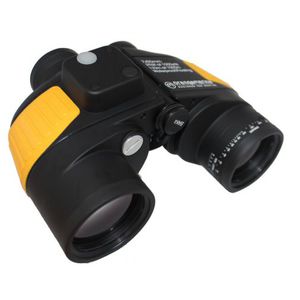 ... Orangemarine 7×50 binoculars with compass floating are designed to help you permanently in your inshore and offshore sailing programs. These binoculars are waterproof, floating and frog ... ... when at sea. Advantage: observed objects and compass remain at the centre of attention. Product Features: ● Outstanding optics for maximum brilliance, clarity, and colour rendition (both models) ● Digital compass ... 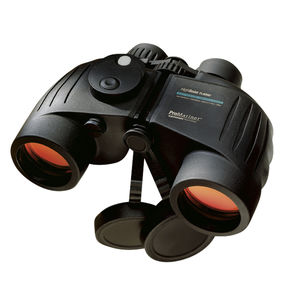 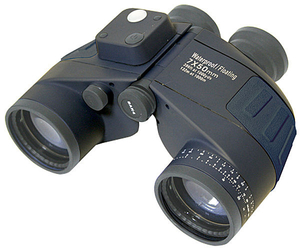 Binoculars make distant objects appear larger and closer. Those with a built-in compass also indicate the bearing of the viewed object.

Binoculars are extremely useful aboard a vessel for examining an adjacent shoreline, other boats and sea- or landmarks. A built-in compass enables the user to determine the bearing of landmarks, even at a great distance.

These instruments use a combination of lenses, mirrors and prisms to enlarge objects in the field of view. Proper focus is achieved by turning a knob. A compass graduated in degrees indicates the magnetic bearing from the boat to any object. Several such bearings allow determination of the vessel's position.

Most marine models are waterproof. Some include an internal compass light or infrared capability for night use. Binocular characteristics are indicated by two numbers. The first is the magnification. The second is the diameter of the objective lenses, which determines image brightness and clarity. For example, 8x50 binoculars magnify eight times and have an objective lens 50 millimeters across. Some models also indicate field of view.

A model with an illuminated compass is more expensive, but can be used at night. The watertight rating should be at least IP6 to ensure protection against spray.

Extend the search
Average score: 5.0/5 (2 votes)
With NauticExpo you can: Find a nearby distributor or reseller| Contact the manufacturer to get a quote or a price | Examine product characteristics and technical specifications for major brands | View PDF catalogues and other online documentation
*Prices are pre-tax. They exclude delivery charges and customs duties and do not include additional charges for installation or activation options. Prices are indicative only and may vary by country, with changes to the cost of raw materials and exchange rates.
Compare
Remove all
Compare up to 10 products